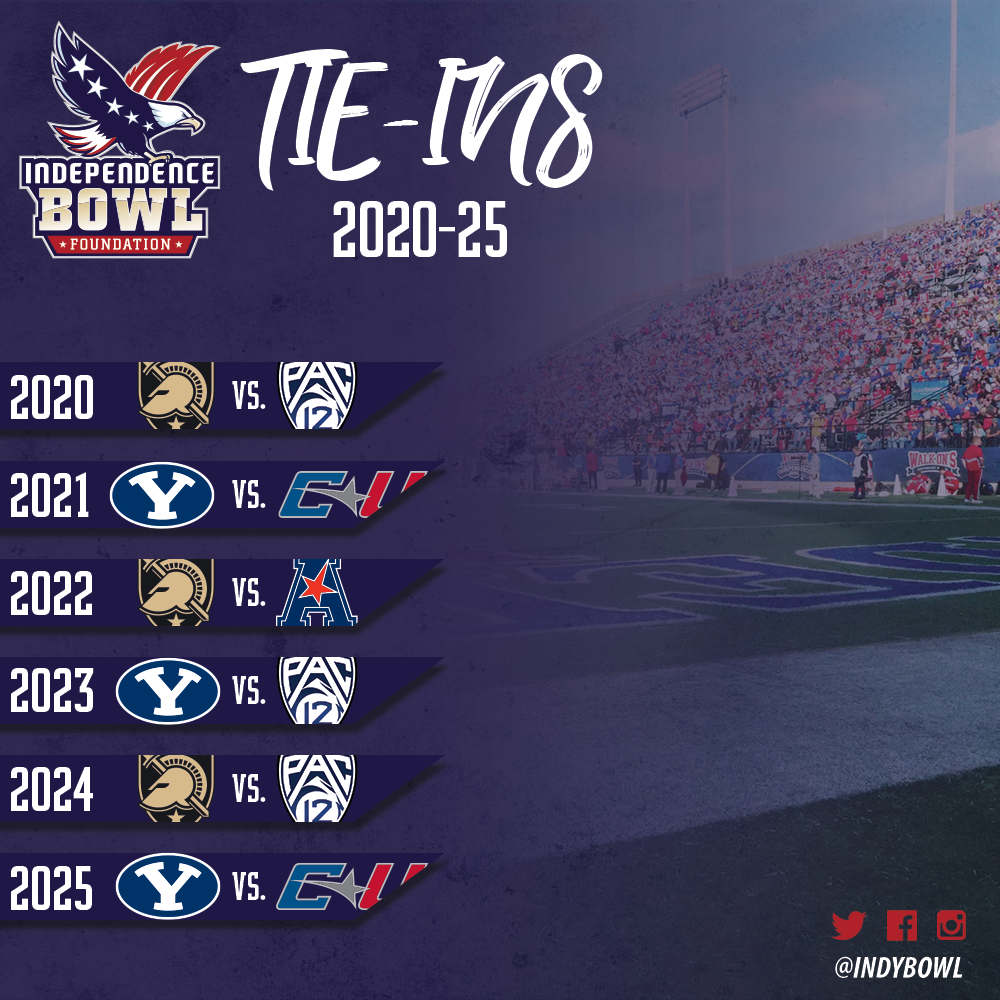 College football’s 11th-oldest bowl game announced last Thursday that a new chapter will be written beginning in 2020, as the Independence Bowl’s matchups going forward will feature a rotation of the Pac-12 Conference, American Athletic Conference (AAC) and Conference USA (C-USA), as well as nationally respected independent programs Army West Point (Army) and Brigham Young University (BYU). The new rotation is a six-year deal that will bring teams to Shreveport from 2020 through 2025.

Provided each primary tie-in gains bowl eligibility in the designated season, the matchups for each year from 2020-2025 will be:

In the AAC’s selection order, the Independence Bowl will select fourth after potential New Year’s Six and Liberty Bowl selections. All selections will factor match-up and geography, among other factors.

The remainder of the Pac-12 bowl lineup, including selection order, will be announced at a later date, as will Conference USA’s future bowl lineup.

“The Pac-12 Conference is excited to expand its lineup of bowl games to include the Independence Bowl,”  said Pac-12 Deputy Commissioner and Chief Operating Officer Jamie Zaninovich. “We have had considerable success in Shreveport, most recently when Arizona defeated Boston College in 2013, and our schools and their fans look forward to once again experiencing the local support and hospitality of the Shreveport-Bossier community.”

“We are extremely pleased to partner with the Independence Bowl and to participate in the 2022 game. The Independence Bowl has a proud history and has enjoyed strong support from the greater Shreveport community,” said American Athletic Conference Commissioner Mike Aresco. “It has featured outstanding teams and exciting matchups over the years, and The American has enjoyed participating in it. The opportunity to play Army West Point in 2022 is very attractive to the teams in our conference. I want to thank Missy Setters and her staff for their efforts which resulted in our inclusion in the Independence Bowl rotation in 2022.”

“We are pleased to continue our partnership with this outstanding bowl in future years,” said C-USA Commissioner Judy MacLeod. “The Independence Bowl fits very well in our conference’s geographic footprint and they will do a great job hosting our teams, schools and their fans.”

“Army football is ecstatic to be partnering with our friends at the Independence Bowl for the next Bowl cycle,” said Army West Point Director of Athletics Mike Buddie. “Having played in Shreveport previously, we are well aware of how the community embraces this bowl and our cadet-athletes will thoroughly enjoy the experience.  I want to thank Missy Setters for all of her hard work to make this announcement a reality and we look forward to this opportunity.”

“We are grateful for the invitation to participate in multiple Independence Bowl games in Shreveport, Louisiana. It’s a historic bowl game with a rich history,” said BYU Director of Athletics Tom Holmoe. “It has been a real pleasure working with Independence Bowl Executive Director Missy Setters and ESPN to create this unique opportunity for our football program and our fans throughout the South.”

ABOUT THE INDEPENDENCE BOWL: