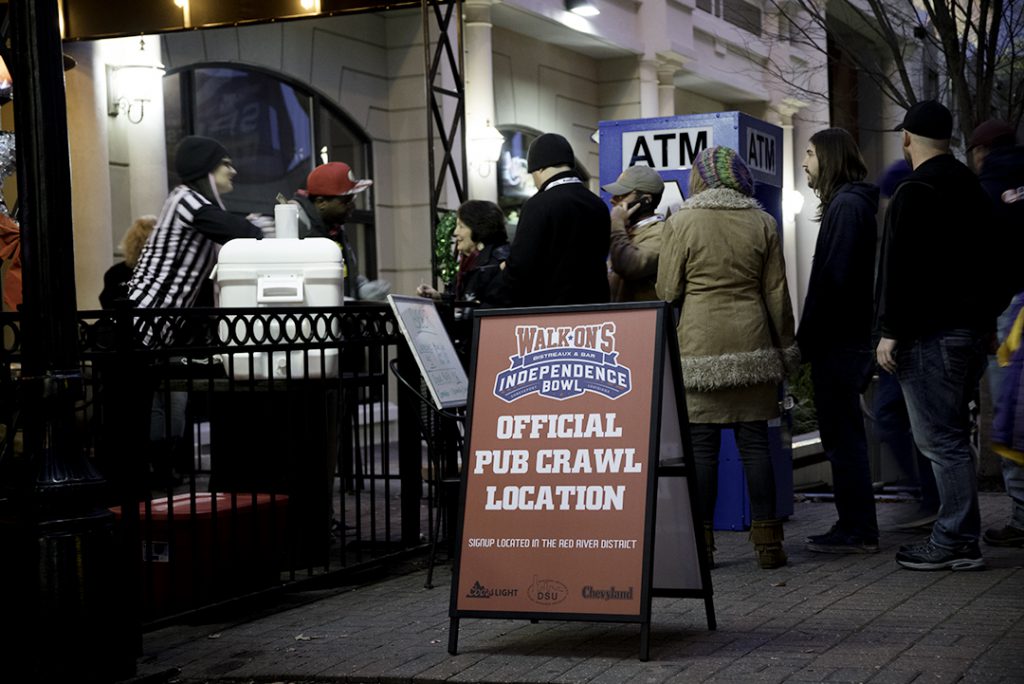 One of the best events bowl week for the Walk-on’s Independence Bowl will get a boost in 2018, as the Pub Crawl presented by Coors Light, ALSCO, Delta Sunshine Brewing Co. and Metro by T-Mobile will feature 10 unique downtown Shreveport locations, a shuttle serve and prizes.

The Pub Crawl is from 5-8 p.m. on Wednesday, December 26, with registration in the Red River District. Entrance into the Pub Crawl is free, and each participant will receive a Pub Crawl credential to mark off locations. The 10 locations throughout downtown Shreveport are Fully Stacked, Nicky’s, Fatty Arbuckle’s, Proud Mary 360, Frida’s, Stray Cat, Noble Savage, Rhino, Abby Singer’s and Parish Taceaux. Every location will have enter-to-win prizes, presented by Glazer Beer, and the more locations participants visit, the more chances they will have to win prizes.

Shuttles provided by iShuttle will take participants to each of the 10 stops on the Pub Crawl. There will be three shuttle pickup locations, which will be located at the corners of Common Street and Texas Street, Milam Street and Marshall Street, as well as Clyde Fant Memorial Parkway under the Texas Street Bridge.

The Pub Crawl kicks off the Rally on the Red Festivities on December 26, with the Mardi Gras Preview Parade, Pep Rally and Block Party featuring Parish County Line to follow. The Mardi Gras Preview Parade will start at 6 p.m. at the Louisiana Boardwalk Outlets, and it will make its way through downtown Shreveport and into the Red River District. The Pep Rally and Battle of the Bands will immediately follow the parade with the Duke University and Temple University marching bands in the Red River District. The night will conclude with the Block Party, which will feature a free concert from Parish County Line in the Red River District. All Rally on the Red events are free to the public.